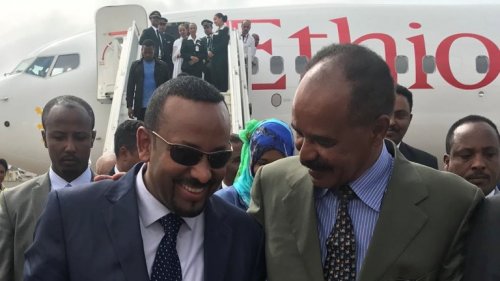 October 24, 2018 (ADDIS ABABA) – An Eritrean opposition group in Afar region, Red Sea Afar Democratic Organization (RSADO) welcomed the peace and reconciliation between the Horn of Africa nations but said Asmara government has no legitimacy to enact it.

Following an initiative by the Ethiopian Prime Minister Abiy Ahmed, Addis Ababa and Asmara signed a peace agreement ending a 20-year conflict and normalized relations. The deal was followed by a reconciliation with the Somali government and Djibouti.

The leader of the separatist opposition group Ibrahim Haron told Sudan Tribune that the peace that Eritrean people wants is more internal than external and the regime should take the initiative to restore freedoms and human rights.

Haron said the RSADO demands the release of all political prisoners, respect all the rights of the nationalities to exercise their political, economic and social rights.“A peace that does not respect the aforementioned rights of the people will never bring stability and risks to fail,” he added.

The RSADO in its statement said the Central Committee discussed the situation in Eritrea and denounced the flagrant abuses the government continues to commit in the country “through indiscriminate killings, everlasting disappearances, unwarranted detentions and mass expulsion into refugee camps of neighbouring countries”.

The group also claimed that the regime in Asmara takes advantage of the normalization with Ethiopia, to penetrate inside its Ethiopia bases and refugee community camps through its agents and to intimidate and influence the clan leaders.

“These acts are a direct violation and compulsion leaving our peoples right, safety and security at stake,” the group said.

In a different register, the meeting highlighted the alleged destructive role United Arab Emirates play in Eritrea and “strongly condemned” the “deliberate airstrikes attacks the UAE is carrying out on Red Sea Afar fishermen in Eritrean territorial waters.