If Trump thinks Iran’s murder plots should be punished, what about Saudi Arabia’s?

Friday November 2, 2018
By Editorial Board 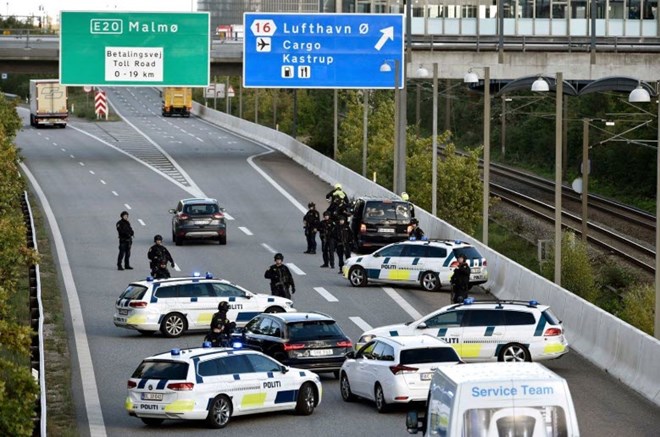 Police vehicles block the street leading to the Oeresund Bridge near Copenhagen on Sept. 28. (Nils Meilvang/EPA-EFE/Shutterstock)

SAUDI ARABIA’s dispatch of a 15-member team to Turkey to attack journalist Jamal Khashoggi added to a global trend of autocratic states reaching out to kill or kidnap exiled dissidents. Russia and China have been pioneers of the practice and for the most part have gotten away with it; that has encouraged others. One such regime is Saudi Arabia’s regional rival Iran, which appears to have returned to an old practice of trying to murder exiles in European capitals — notwithstanding its dependence on European support for resisting new U.S. sanctions.

This week, Denmark’s government revealed what it described as an Iranian plot to assassinate a man who leads the Danish branch of a group advocating independence for an Arab-populated region of Iran. Danish Foreign Minister Anders Samuelsen, saying it was “completely clear that the arrow is pointing at the Iranian intelligence service,” recalled Denmark’s ambassador from Tehran and said he would raise the possibility of new sanctions by the European Union.

That was the second Iranian plot broken up in Europe in four months. In late June, European security services arrested two Iranian émigrés living in Belgium and charged them with plotting to bomb a Paris rally of the opposition Mujahideen-e Khalq that was attended by former New York mayor Rudolph W. Giuliani. An alleged Iranian intelligence officer who authorities said directed the operation was arrested shortly afterward in Germany.Some have marveled at Iranian audacity in planning attacks on the territory of countries that have been trying to devise ways to circumvent the new U.S. sanctions due to take effect Sunday. Both Denmark and France strongly opposed President Trump’s decision this year to cancel the Iranian nuclear deal and to reimpose an economic blockade on the government of Hassan Rouhani.

U.S. and Israeli officials have done their best to exploit the uncovering of the plots. The Paris case, national security adviser John Bolton declared, “tells you, I think, everything you need to know about how the government of Iran views its responsibilities in connection with diplomatic relations.”

That’s true enough — and E.U. leaders ought to punish Tehran. Yet Mr. Bolton’s words raise the question of how Saudi Arabia ought to be judged in light of what it now acknowledges was the premeditated murder of Mr. Khashoggi inside its own consulate in Istanbul. Should not the regime of King Salman and Crown Prince Mohammed bin Salman be held to the same standard as Iran? And if the United States does not impose significant punishment on Saudi Arabia, how can it expect other nations to enforce its sanctions against Iran?