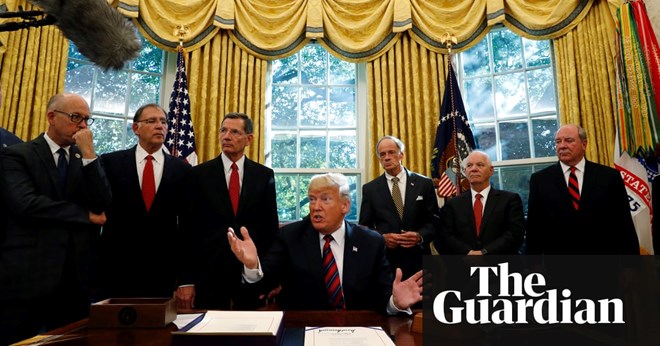 Donald Trump has said for the first time that Saudi crown prince Mohammed bin Salman could have been involved in the operation to kill dissident journalist Jamal Khashoggi noting that “the prince is running things over there” in Riyadh.

The comments, in an interview with the Wall Street Journal, appeared to mark a shift in the president’s view of Khashoggi’s murder on 2 October in the Saudi consulate in Istanbul. He has hitherto appeared to take Saudi royal denials of involvement at face value. But on a day the state department announced it would sanction Saudi officials implicated in the writer’s death, the president appeared to give the benefit of the doubt to King Salman but not necessarily to his powerful son.

Asked about the crown prince’s possible involvement, Trump said: “Well, the prince is running things over there more so at this stage. He’s running things and so if anybody were going to be, it would be him.”

Trump told the Wall Street Journal he had closely questioned Prince Mohammed about Khashoggi’s murder, posing questions repeatedly and “in a couple of different ways”.

“My first question to him was, ‘Did you know anything about it in terms of the initial planning’,” Trump said. Prince Mohammed replied that he didn’t, Trump said.“I said, ‘Where did it start?’ And he said it started at lower levels.”

Twenty-one Saudis will have their US visas revoked or be made ineligible for US visas over the journalist’s killing, the state department announced, as the Trump administration struggled to regain the initiative amid the uproar over a murder that has thrown the US-Saudi alliance into question.

Mike Pompeo, the US secretary of state, said other measures were being considered, including sanctions: “These penalties will not be the last word on the matter from the United States.

“We’re making very clear that the United States does not tolerate this kind of ruthless action to silence Mr Khashoggi, a journalist, through violence,” Pompeo said. “Neither the President nor I am happy with this situation.”

The secretary of state said the US would “continue to develop our understanding of the individuals that were responsible for this, who not only executed it but led and were involved and were connected to it”.

The visa revocations would be the first punitive measures taken by the administration against the Saudis since Khashoggi disappeared after entering the consulate on 2 October. However, under pressure from Congress, it is likely to extract a higher price from Riyadh for the brutal killing of Khashoggi, a US resident and columnist for the Washington Post who was a critic of the crown prince.

Speaking to reporters in the Oval Office, Trump spoke contemptuously about the murder plot: “They had a very bad original concept. It was carried out poorly and the cover-up was one of the worst in the history of cover-ups.”

Trump has put out mixed messages over recent days, vowing “very severe” consequences and mentioning possible economic sanctions, but also ruling out a block on arms sales to Saudi Arabia and highlighting the country’s role as a US ally against Iran and Islamist militants.

At the weekend, the US president said he thought that Saudi claims that Khashoggi had died in a “fistfight” were credible, and termed the announcement an “important first step”.

His comments on Tuesday came after the Turkish president, Recep Tayyip Erdoğan, publicly tore down the Saudi version, making fresh allegations that Khashoggi’s “savage” murder was premeditated, and calling for an independent investigation.

Erdoğan had billed his keenly awaited address at the Turkish parliament in Ankara as the moment he would reveal the “naked truth” about what happened to Khashoggi. He said he was not satisfied with Riyadh’s suggestion that the killing was a rogue extradition operation gone wrong, and called for the “highest ranked” of those responsible to be brought to justice.

“Intelligence and security institutions have evidence showing the murder was planned … Pinning such a case on some security and intelligence members will not satisfy us or the international community,” he said. “From the person who gave the order, to the person who carried it out, they must all be brought to account.”

Contrary to expectations Erdoğan’s first update on the three-week-old case did not officially reveal the existence of audio and video evidence understood to be in Turkey’s possession.

Erdoğan did reveal that on the day before Khashoggi was killed, Saudi agents arrived in Istanbul and began to scout locations, including the Belgrad forest near Istanbul and the city of Yalova to its south. Police have subsequently searched both areas for Khashoggi’s remains.

The president did not name the powerful Bin Salman, the kingdom’s de facto ruler who, it is alleged, was probably aware of, and possibly even ordered, the silencing of his prominent critic, but observers were in little doubt as to whom his repeated mentions of “highest ranked” referred.

He otherwise spoke of the “sincerity” of Saudi Arabia’s King Salman in the investigation. The gaps in the speech suggested Erdoğan had more cards to play in the evolving diplomatic crisis.

Saudi Arabia’s widely derided version of events has created a scandal for the kingdom. The G7 industrialised nations issued a fresh call for “a thorough, credible, transparent and prompt investigation”, adding Saudi Arabia needed to put in place “measures to ensure that something like this cannot happen again”.

Many western companies have pulled out of a large foreign investment conference in Riyadh that began on Tuesday.